In May 1874, a sheriff’s posse descended on a remote, rough-hewn adobe cabin in Rancho La Brea, six miles west of Los Angeles, and captured the West’s most-wanted bandit, Tiburcio Vasquez, in a hail of bullets.

In his twenty-year career, Vasquez is said to have stolen the equivalent today of millions of dollars, much of it he spent in pursuit of his insatiable compulsion for seduction – in fact, it was a sordid sex scandal that led to his betrayal.

News of the famous gang leader’s arrest became the first national story reported out of the future Sunset Strip. News of the search and capture was reported in the New York Times and the Boston Globe. He was hanged on March 19, 1875, in San Jose, California. 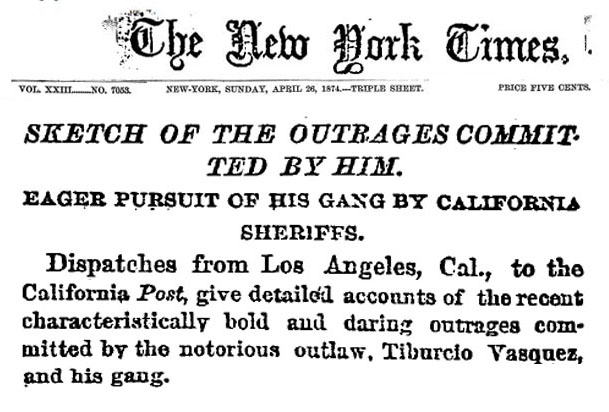 In a quirk of history, Vasquez’ career as a celebrity gang boss foreshadowed those of twentieth-century Sunset Strip mobsters Bugsy Siegel and Mickey Cohen.