The Strip, that portion of Sunset Boulevard running through West Hollywood, is lined with hip hotels, grungy rock clubs, upscale restaurants and expensive boutiques. But, unlike the Spanish and Art Deco buildings of Hollywood proper, much of this stretch, including notable establishments like the Rainbow Bar and Grill and The Roxy, was built in the Tudor revival style. Made to look like an English village.

Ever wonder how the English Tudor style came to West Hollywood?

To start, what characterizes the Tudor revival style of architecture? Tudor buildings are wood structures with steeply pitched roofs (shingles if you got ‘em) and windows divided by finely knit diamond panes. Tudor is also known for a technique called “half-timbering” where the area between the wood structure is infilled with plaster and painted a contrasting color. The gabled front face of the Rainbow Bar and Grill (originally the Villa Nova Restaurant) is a clear example. 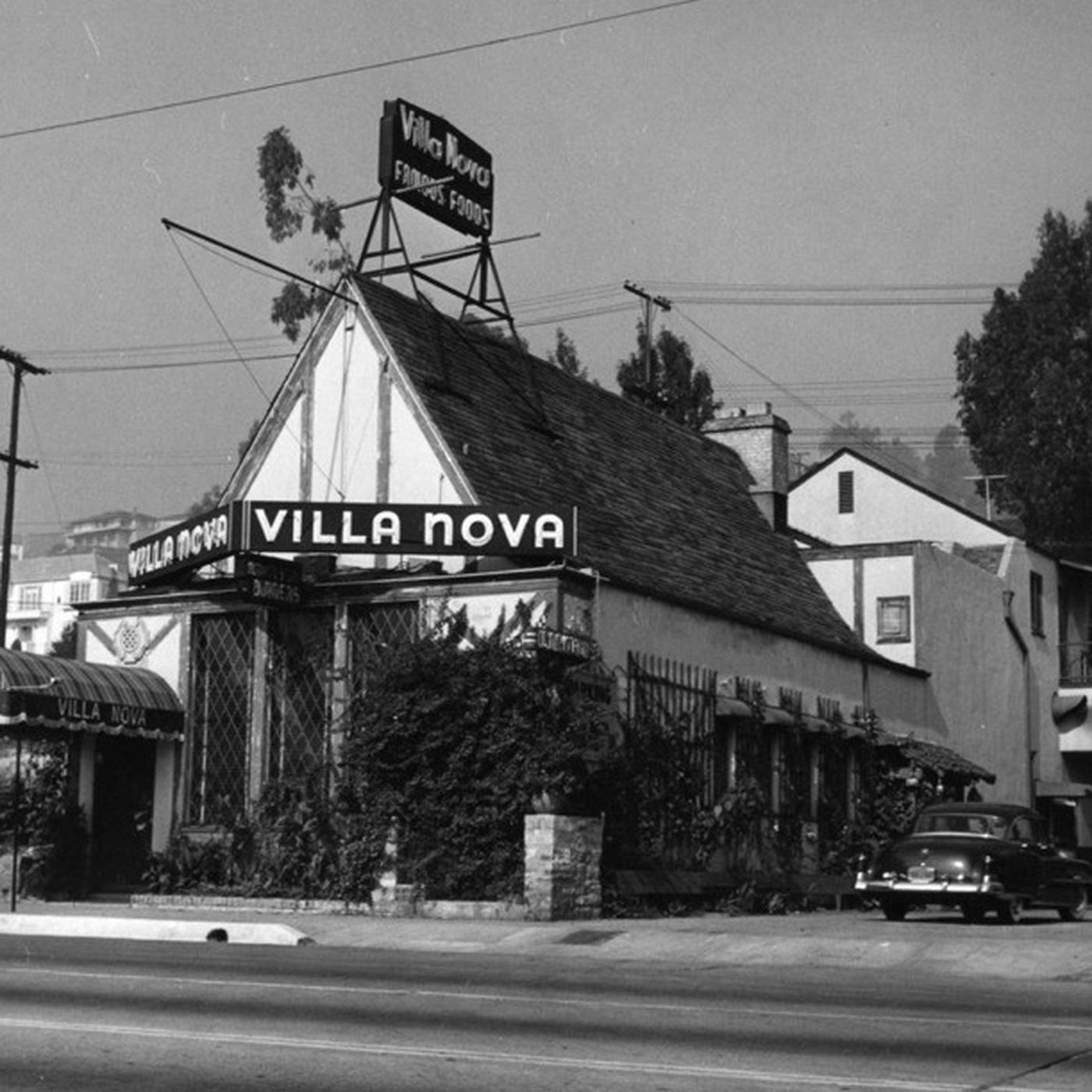 It should be noted (for you purists) that to call many of the buildings considered here Tudor is a bit of a stretch. As with many 20th century buildings done in a historic style, Tudor here has been watered down, cheaply mimicked and is, more often than not, strictly a surface treatment.

The early 20th century, when much of The Strip was built, was a time of eclecticism in American architecture and styles were freely thrown around and mixed together. This was (and often still is) the case in greater Los Angeles, where buildings are cheaply made and often treated like film sets. The surface level is all the camera requires, so many figure, why do more. This mix of styles allows parts of Los Angeles to take on the appearance of nearly anywhere in the world when on-screen and gives LA’s streets their eclectic character.

Considering this, who more perfect than famous film-maker Charlie Chaplin to create a stage-set like streetscape that would influence a decade of building development?

Chaplin, in a quest for total creative control over his work, built his own film studio in 1917. He chose a 5-acre property at the corner of La Brea and Sunset boulevards. Six new buildings along La Brea, completed in 1918, featured Tudor revival exteriors (inside they were basic offices) and were arranged to give the effect of a picturesque English village street. They reminded Chaplin of his native England and were highly publicized early examples of the Tudor revival style in Los Angeles. Importantly, they were an application of Tudor revival to buildings that were not single family homes.

The influence of Chaplin’s studio can be seen in the nearby Normandie Towers, built in 1924 at 7219 Hampton Ave. at Fountain, as well as in the Hansel and Gretel Cottages, built in 1923 at 1330 North Formosa Ave. at De Longpre. Both are generally Tudor revival in style and the Normandie Towers are a listed West Hollywood historic resource.

Further out, Elmer R. Mauzy, who developed the West Hollywood land between Sunset Boulevard and Harratt Street at Larabee, adopted the Tudor revival style that Chaplin made so visible. For Mauzy, however, this was not a nostalgic decision. It was a marketing ploy. His complex, built in 1924, was named The English Village Shops and included both stores along Sunset and a grouping of apartments behind. All that remains of it today is a cluster of cottages with lushly planted walkways and courts along Harratt Street.

For his village shops Mauzy was inspired by the drive-in service station (a novel concept in 1924) and incorporated a U-shaped courtyard drive. Making it one of the first shopping centers to incorporate off-street parking, an unheard of feature at the time.

The English Village Shops offered basic services: a market, drug store, hardware store, barber and the like. The shopping equivalent of the service one got at a drive-in service station. Drive in, get the groceries, prescription, that screwdriver you need, a haircut and you are back on the road in no time … in theory.

Unfortunately for Mauzy, his development did not provide enough square footage for his tenants to sustain their businesses. And one look at the drive-in parking court invokes nightmares of stacked parking; waiting to drive out while the owner of the car ahead is getting a hair cut. The English Village Shops, while innovative, were ultimately a failure as both a building and business model. It did not survive a decade.

But, while the English Village Shops were a short-lived folly, they were an important part of a trend that had a lasting influence on the Sunset Strip. With Chaplin’s studio on Sunset at La Brea and The English Village Shops near the other end of The Strip at Larabee, many developments going up between them in the 20s and 30s chose to continue the Tudor revival trend.

The Sunset Strip could have, were the streets narrow and the fog heavy, served as an English village film-set. But in the bright of day, 90 years on, the image does not hold. Much like Chaplin’s work, these structures can be seen as a naive combination of slapstick and pathos.

These buildings, like a pie in the face, show no care for their surroundings or stylistic properness. Yet at the same time they can invoke unexpected feelings of compassion. Compassion for something that must survive real experience when intended as little more than an image.