Drinks, Dinner and Dancing at the Players Club 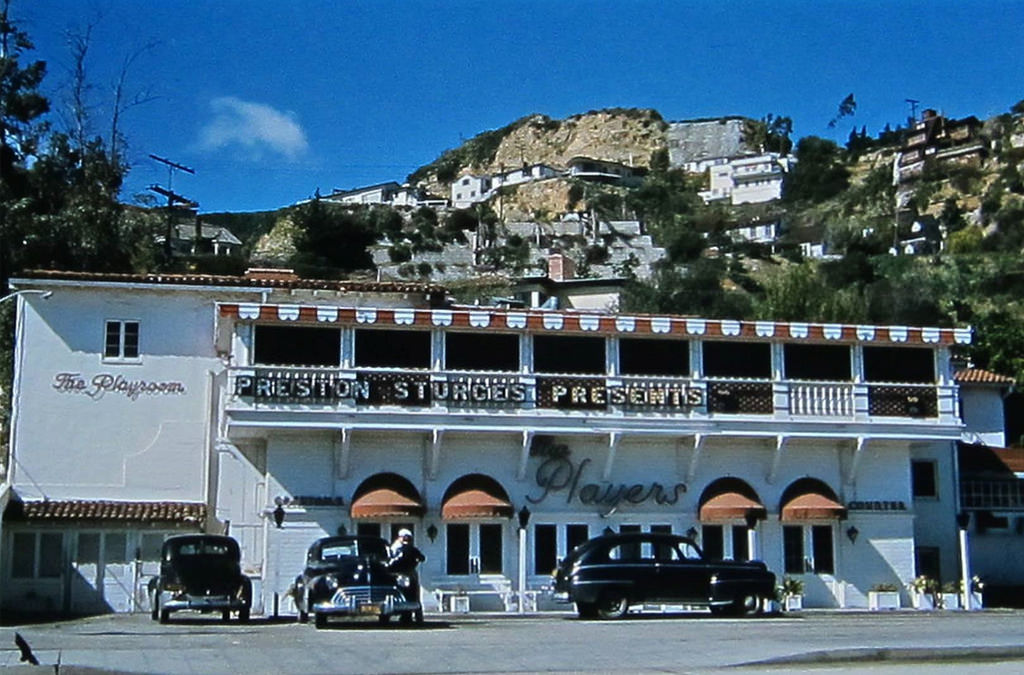 The Players Club was unusual among the celebrity nightclubs on the Sunset Strip in that it was owned by a filmmaker. It was the brainchild of screenwriter and director Preston Sturges. A truly original thinker, Sturges’ movies often dealt with serious subjects but the films themselves could be quirky and even whimsical. Some were among the most innovative and successful movies of the era – notably “Sullivan’s Travels,” “Palm Beach Story” and “The Miracle of Morgan’s Creek.”

Preston Sturges’ concept for the Players was also ahead of its time. It was set up to provide a complete night out for celebrity clientele – from drinks and hors d’oeuvre to dining and dancing – all under one roof. He’d had experience operating a nightclub on the Strip. In 1936 he opened Snyder’s Café at 1114 Horn Avenue [map], according one source. The building at that address would later house two popular spots: Café Gale in the 1940s and ‘50s and Spago in the 1980s. It had a great location on a hill above the heart of the Strip and great views across the foothills of the Los Angeles Basin. However, the building was a former residence and interior space was limited. It had no dedicated parking.

In 1939 he bought the building 8225 Sunset Blvd. [map], which was farther east on the Strip. The new property had been the Hollywood Wedding Chapel most recently, but it too had been built as a residence. It had limited parking, but Sturges had a plan to add room for a dozen or more cars.

The building had once been home to William Morris, a stage actor and father of a better known film actor, Chester Morris – Boston Blackie in the feature series. Sturges closed Snyder’s that December, and moved the fixtures down the street to the new building, which was undergoing a massive renovation.

The house was situated atop a small hill, with a driveway to the east leading to basement garage. Sturges removed the entire hill in front of the building, flattened and paved the remaining ground for parking. The basement became the ground floor, with a colonnade of French doors along the front. The former first floor became the second floor, and there were plans to add a third floor later.

But all that service came with a lot of overhead, starting with salaries for 156 chefs, waiters, cleaners, bartenders, parking attendants and others. Sturges subsidized the costs while he was under contract at Paramount, but income became sporadic after he left the studio in 1944. Even so, he proceeded with construction on the third floor.

The result was what may have been the world’s first dinner theatre. The room had 250 seats for dinner and a state-of-the-art, hydraulically powered rotating stage. Within a year after the theatre opened, Sturges discovered his bookkeeper had been embezzling from him. The Players wound up on the auction block.

The building has been through a series of incarnations. It housed a Japanese restaurant, Imperial Gardens, for many years. It was the Roxbury, a hot nightclub in the 1990s – 90210’s Shannen Dougherty famously got into a brawl there – and then a Japanese restaurant again, Miyagi’s. Now, after a substantial renovation, it’s a Pink Taco.

During the renovation a longstanding Hollywood myth was proved to be true. There had long been talk of a tunnel that connected Players to the Chateau Marmont, which stood above and across Marmont Lane to the east. During construction, the entrance to the tunnel under Marmont Lane was uncovered. The tunnel is sealed currently sealed, according to restaurant management.

Mocambo: An Elegant Venue for the Top Entertainers of the Day

Drinks, Dinner and Dancing at the Players Club