Located six miles west of Downtown Los Angeles, West Hollywood is situated at the foot of the Hollywood Hills, a section of the Santa Monica Mountains. Bounded by the city limits of Los Angeles to the north, south and east and Beverly Hills to the west, since 1984, it has been an incorporated municipality, with its own local government.

About 38,000 people live in West Hollywood’s 1.9 square miles, making it one of California’s more densely populated cities. It is home to world-class hotels and restaurants, a vibrant gay nightclub scene and television, film and digital media production.… Read the rest 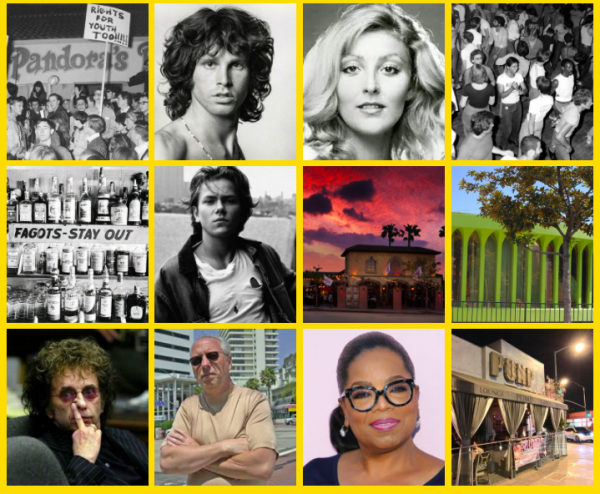 That camel barn on Melrose Place. The celebrity-packed restaurant where Comedy Store is now located and where Frank Sinatra got headlines for assaulting a journalist. Art Linkletter’s bowling alley on Santa Monica Boulevard (which in its later years Cher came to roller skate and where today you can get a prescription filled) and Jim Morrison’s room at the Alta Cienega Motel. Then there’s the building on Sunset that private-detective-to-the-stars Anthony Pellicano allegedly planned to blow up, and the Viper Room, where River Phoenix took a fatal overdose.… Read the rest

The Center will also seek opportunities to engage the public with the city’s history. For example, we advocate establishing the Sunset Trail, a series of illustrated historic markers at key sites along the Sunset Strip. The markers will be a boon for visitors and locals alike and greatly enhance the pedestrian experience on the Strip.… Read the rest

Few cities West Hollywood’s size have histories as rich and storied as ours. Officially chartered in 1984, West Hollywood is often thought of as a young city. In fact, its history has deep roots in California’s Spanish and Mexican past, and the city’s development as a regional transportation hub began more than 125 years ago with the establishment of the village of Sherman.… Read the rest

This group was formed in 2019 to develop and enact the Strategic Plan for the Center’s foundation.

Bob Bishop brings a journalist’s eye for the unusual and an historian’s requirement for accuracy to a popular series of local history articles he has written for WEHOville.com since 2015. He lived in West Hollywood for 22 years before relocating to his home state of Mississippi recently. While in West Hollywood, he was active in neighborhood and business groups, as well as charities including Project Angel Food and Pets are Wonderful Support.… Read the rest
… Read the rest

The West Hollywood History Center is a community-based nonprofit organization. Its primary goal is to establish a museum – the West Hollywood Museum – that will tell the amazing story of the history of West Hollywood and preserve artifacts from the city’s past for future generations.

In the interim, however, the Center will create a virtual museum that will collect stories, videos and photographs that chronicle our history.

Additionally, the Center will also connect the community and its visitors with the city’s history by hosting events and pop-up exhibits, It will also provide guests in our city with context that will add a cultural dimension to their visits.… Read the rest