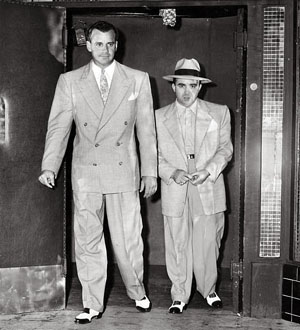 After Bugsy Siegel’s assassination in 1947, Mickey Cohen took over the Southern California rackets at the behest of the East Coast bosses. He soon moved his headquarters to the corner of Holloway and Palm on the Sunset Strip and ran operations from there until he went to prison on tax charges in 1951. It wasn’t all fun and games, however. Cohen was targeted for assassination twice on the Strip. The photo above of Cohen (on the right) and his bodyguard, state agent Harry Cooper, was taken just hours before the second attempt, in July 1949.